The story of the mysterious woman with the initials....I.H. who became a household name.  Who was she?  Where did she come from and how was she chosen to be the International Harvester female Icon?

This may be great time to introduce Irma Harding directly after the Super Bowl 2017.  And why would that be?  Super Bowl and advertising go hand in hand.  This year's Super Bowl ads cost companies $5 million for 30 seconds.  The math says that comes to $166,667 per second according to the Business Insider report.  A bit more than what the advertising may have cost back in the day one would surely suppose.

But wait:  Advertising, on the softer side, was once a part of growing up.  Advertising showed products that people could relate to in their lives.  Life was once simple and mindful.  Advertising gave people hope for a more convenient way of living.  It made mile markers that pinpointed the years from childhood to adulthood.  Quaker Oats signified warmth before or after going out on the cold treacherous winter's day.  Coca-Cola was the drink of worldwide peace.  You knew what time of the year it was and what was going on in the world by advertising.  Santa and Coca-Cola were always together at Christmastime. Let's not forget Betty Crocker, Aunt Jemima or the Sprite Boy.   "Advertising created childhood memories that will live on and remind us just where we were at the time of that product",  quoted by a mere "Baby Boomer".

So which came first the chicken or the egg, Irma or refrigeration?  International Harvester first offered only industrial freezers and refrigerators such as milk coolers and meat freezers.  This was offered before and after WWII (1939-1945).  The coolers were used on dairy farms around 1935.  These used gasoline engines to work since there was no electricity to operate them.

Looking back to May 20, 1936, the day the Rural Electrification Act was enacted. This was the widespread of opportunity for those in rural areas to have their very own in-home electricity.
Here's the road to that article if you choose turn off now:
RURAL ELECTRIFICATION ACT

The spread of electric in the home brought new marketing ideas to the country kitchen.  International Harvester was right on target and ready to expand its product line.  And so product, marketing and advertising came into full circle. IH studied other product icons such as Betty Crocker to get a good look on a grand idea.  International Harvester's brainchild was Irma Harding.

Irma was a product of many women.  It was as if International Harvester had taken the best ingredients of women and their kitchens and blended them all together.  Irma was the frosting on the cake.

How and When Irma Harding was Born

What would Irma Harding look like to properly represent the women of those times, especially with a zest that appealed to the strong farm women back in the day?
Zelma Purchase and Olive White
of International Harvester
Evansville, Indiana Plant
There were around 70 IH home economists that helped inspire the mix of Irma Harding.  The economists worked in the IH test kitchens. The two woman pictured above were chosen as possibly the best role models for creating Irma's personality. 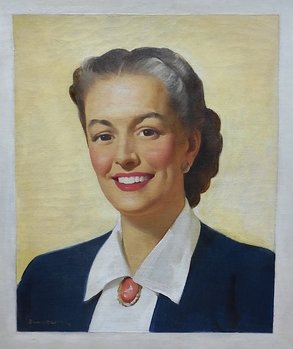 Irma Harding - Born: 1947
Irma was portrayed as a no nonsense woman who was knowledgeable, kind and practical.  She was made to appeal to the minds of farm wives and to be able to understand their needs.

The picture of Irma was by artist Haddon Sundblom.  He had also created the faces of Betty Crocker, Quaker Oats and several others for advertising.


Here's the road to some Haddon Sundblom articles if you choose turn off now: 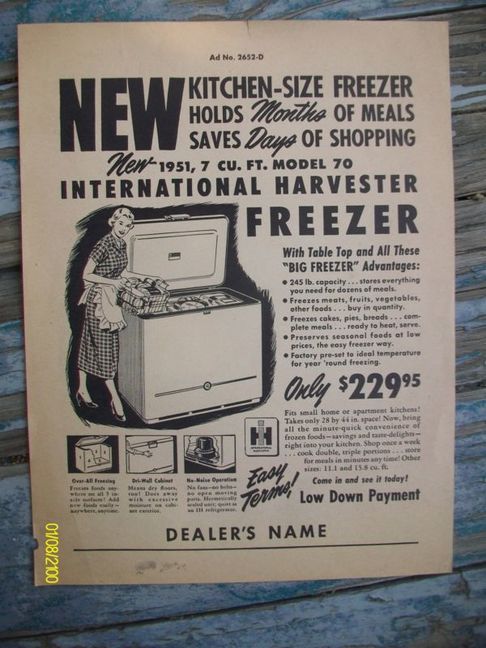 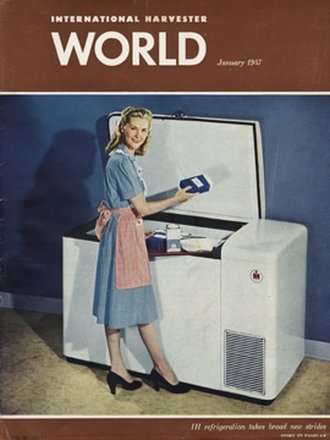 ​As They Say,
​Two Heads are Better than One

As you may have already noticed in the ads
taken over the years, Incredible Irma is a woman of many faces.  Have you ever wished
you had a double?